In this five-part tutorial series, you'll learn how to build a Zendesk app from start to finish. The app you'll build is called Requester X-ray.

This tutorial covers the first steps to building the app:

To download the completed source code of the app in this tutorial, click xr_app.zip. You can review the code as you follow along or check your work.

To build and upload a private app, you must have Zendesk Suite Professional plan or above. If you're on the Team or Growth plan, Zendesk offers developers a free, sponsored Enterprise account for testing and debugging apps. We ask only that you don't use it to provide actual support. See Request a sponsored test account.

You can also try out apps in the Trial account, which gives you access to all Professional features.

You should have a good idea of how your app will look and work before you start working on it. The Requester X-ray app will display the following information about the requester:

The app will display this information in the Apps panel on the right when the agent opens a ticket in the Zendesk Support agent interface.

The app will include a "Report bugs" link that lets the agent report a bug in an email to the app's author.

Here's a mockup of the user interface: 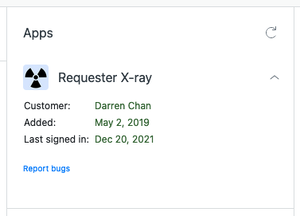 After installing the Zendesk app tools, you can start building the app. The first step is to create the starter files for a new app called Requester X-ray in a folder called xr_app. You can use the ZAT tools to accomplish this task.

Everything is in place to start building. In the next tutorial, you'll learn more about the HTML file to be iframed into Zendesk Support. You'll add a footer, add some stylesheets, and replace the logo to meet the design requirements specified in Planning the app above. Get started: Part 2 - Designing the user interface.